Save the Seahorse - Steampunk Seahorse | Moyustore Seahorse is a general name of the fishes in the family Syngnathidae. "Hippocampus" comes from the Ancient Greek hippókampos, itself from híppos meaning "horse" and kámpos meaning "sea monster" or "sea animal", which concludes to a sea monster that looks like a horse. The name is actually influenced by ancient Greek mythology, in which the seahorse was described as the horse of the god of the sea. All of the seahorses have some morphological similarities, such as a horse-like head, a common feature of fish, which is fins (though only dorsal and the pectoral fins are more developed), a tail for grasping objects like a New World monkey, and the most peculiar is that the male seahorse has a brood pouch (said when introducing striped hippocampus). Therefore, the sea horse can be absolutely rated as the "four unlike" in the ocean.

The seahorse's head is the most distinctive. In addition to having a straw like snout, a crown on the top of the head, and buccal spines on each side of the cheek, some species of seahorse have a unicorn-like nose spines between each nostril, and a pair of eye spines above the eyes. These characteristics vary from species to species and are often used as a quick way to identify a species. 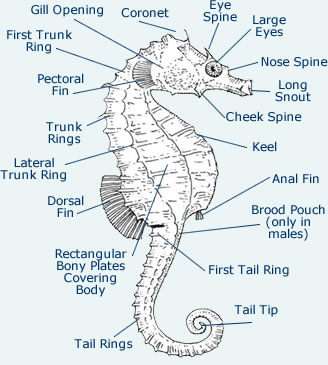 How big is a seahorse? Don't be fooled by the picture above, it's fake. Seahorses are only small fish in the sea, and the largest of them can only grow to about 35cm, such as H. Abdominalis and H. Kelloggi which are distributed in China and regarded as "tall, rich and handsome" in the seahorse family. However, there are also very small and cute seahorse species, such as H. Bargibanti, which usually grow to no more than 2cm in adult size. For this, they have become the star animals of macro photography enthusiasts and divers alike. They've been on earth for 20 million years

The origins of seahorses can be traced back to more than 30 to 20 million years ago, in waters from what is now Southeast Asia to Northern Australia. The seahorse is most closely related to a group of Syngnathidae fishes called "Idiotropiscis" . The biggest difference between the two groups is that the head and trunk of seahorses can be bent, while the Idiotropiscis cannot be bent to a high degree. Seahorses are upright, while Idiotropiscis are prone.

They have five special powers

As the saying goes, "A sparrow may be small but all its vital organs are there." In addition to their unusual appearance, seahorses also have some little-known characteristics.

Seahorses are the most vulnerable group in the ocean. They feed on small zooplankton (such as cladophora, copepods, and shrimp), and their prey is constantly changing as they grow and develop, due to the different mouth opening sizes and nutritional needs.

Because seahorses are poor swimmers and have limited defenses, they become prey for many marine animals, including turtles, cormorants, rays, sardines and even humble invertebrates like crabs, shells and sea urchins. In order to avoid being bullied and eaten, seahorses have three different strategies when confronted by predators - hiding, playing dead, and clinging legs. Look, they're pretty smart. Seahorses are the most devoted fish in the world

Unlike most fish in nature, seahorses are usually strictly monogamous and have unique and complex mating behaviors and habits.

First of all, because seahorses are naturally sparsely distributed, with fewer than tens in a 100x100m space, it's not easy for an adult to find a suitable mate. If a pair of adult seahorses of comparable size meet in the wild, they will "dance" together and form a bond. For the next week or two, they met every day at the spot where they first met, usually at dawn or late afternoon when the moon was barely visible. In the quiet surroundings, the male seahorse and the female one will "dance" together, sometimes with their tails entwined like human hands, which is very funny and romantic. After forming a bond, the female seahorse swims into the water at the right time to mate, releasing eggs into her pouch, which are then fertilized and raised into young.

It takes about 9 to 45 days of gestation for the male to give birth to his pups. Usually, there are 2 to 2,000 pups per litter, but only a small percentage of them make it to adulthood. Destined to roam since birth

Newborn seahorse pups, usually the size of mosquitoes, start to live on their own. Within 2 to 8 weeks after birth, they drift with the sea to reach new habitats. In the process, they will "clump together", and catch some of the seaweed in the water layer with their tails. By using this form of hitchhiking, not only do they save energy (since they are still weak swimmers), but also they confuse predators. Despite this, a large percentage of the pups starve to death or are eaten by other animals (cormorants, penguins, turtles, tuna, etc.) during drifting.

What does the disappearance of seahorses mean?

Seahorses are strict on environmental quality, and only live in the sea areas with prominent water quality and relatively complex and healthy habitats, including seaweed beds, mangroves, coral communities as well as estuaries and lakes with good  water quality.

A typical case is the H. coronatus, who is named for its well-developed crest and a species of seahorse only living in temperate waters. It was first recorded at the end of the last century in China (" Bohai Sea Fish Records " in 1994) and was found in Bohai Sea. However, no reliable source has proved that it was found again in the past ten years, which is likely to be closely related to marine pollution and overfishing in Bohai Sea. The disappearance of seahorses is a reminder of the deterioration of the marine environment. The status of the seahorse population is worrying

Due to their low natural fertility and demanding habitat condition, the seahorse family is now under severe threat from overfishing led by bottom trawling and damage to the marine environment.

14 seahorses are currently known to be threatened on the International Union for Conservation of Nature (IUCN) list of endangered species. The Convention on International Trade in Endangered Species of Wild Fauna and Flora (CITES) officially listed seahorses as subject to strict international trade controls in 2004 - the first marine fish to be listed on appendix II of the convention. The seahorse is not a horse, but a kind of fish that lives in the sea and named for its resemblance to a horse. At present, the classification of seahorse is still controversial worldwide. According to the classification system adopted by CITES, seahorse is the general name of species of Syngnathiformes Syngnathidae Hippocampus. Seahorses are widely distributed in temperate and tropical seas, and the IUCN recognizes 46 species in existence. During the breeding season, female seahorses deposit their eggs in the male's ventral pouch, which is brood pouch. After receiving the egg, the male seahorse releases sperm to fertilize the egg and incubate the fertilized egg for 15 to 30 days. The pouch is rich in blood vessels that provide nutrients for the hatching of the fertilized egg. When the pups hatch, the male launches them out of the pouch. With all that said, this is why we designed the Steampunk Seahorse Model Kit.