Mid Year Sales Save 12% off Code:Mid

Guan Yu originated from the famous Chinese warlord during the Warring States period. This mecha is designed on the basis of this.

His melee weapon is Green Dragon crescent moon blade,a type of traditional Chinese weapon. It's said that the best blacksmith in Warring States period only builds this sword at the night of the full moon. When the work was almost finished, suddenly, 1780 drops of blood were dripping from the air. It's also sometimes referred to as the Frost Fair Blade, from the idea that during a battle in the snow, the blade continuously had blood on it; the blood froze and made a layer of frost on the blade. The local people regarded it as the blood of green dragon. So this is how its name comes from. His long-range weapon is the fire arrows. The special weapon is light waves from wings. Lv Bu
Lv Bu originated from the famous Chinese warlord during the Warring States period. This mecha is designed on the basis of this. Zhang Fei: originated from the famous Chinese warlord during the Warring States period. This mecha is designed on the basis of this.

The melee weapon is Snake Spear. The long-range weapon is the Fury II missile. The special weapon is violent ultrasound.

Snake Spear looks like the shape of a snake, hence the name. The tip of the spear is eight inches long, with double peaks on the blade, and made of iron point steel on the left and right. The shaft is one foot long. Zhao Yun
Zhao Yun: originated from the famous Chinese warlord during the Warring States period. This mecha is designed on the basis of this.

The melee weapon is a silver gentian spear. The long-range weapon is the Zhanqi Quadruple Missile. The special weapon is a rapid spur.

Gentiana shining silver spear: Holding a gentian shining silver spear in hand. Zhao Yun wears a white helmet and white armor. It is said that it was on the Changban slope of Dangyang. Liu Bei was pursued by Cao Cao, and his family members were besieged by the Cao family’s army. General Zhao Yun held Liu Bei’s son in his arms and fought bravely to protect Liu Bei’s wife and Mrs. Gan from breaking through the siege and rescued both of them. You can also buy the extra base here : Features:.Made of high-quality metal materials. This is a laser cutting ultra-precision high-quality metal model.The assembly does not need glue, just follow the assembly drawing to connect by screws.You can also use existing parts to DIY other shapes according to your personal ideas to create your own unique model, amazing details and wonderful DIY experience.Let children to assemble this model, not only exercise their hands-on ability and creativity, but also let children enjoy the joy of assembly.Suitable for people over 14 or children under the age of 14 to play with their parents.A total of 573 parts. It takes about 6.5 hours to assemble, depending on the individual's hands-on ability. The size after assembly is about 21 x 4 x 21CM, and the weapon height is 16CM.The edges of the parts are sharp. Please do not play with infants and young children to avoid injury. (Slight scratches on the surface of stainless steel parts are normal and do not affect the overall appearance. Thanks for your understanding). Have fun and sense of accomplishment through DIY assembly.This model is very beautiful and each joint is movable. This is a perfect gift, a special gift for your friends, family and children, it can be collected or used as home decorationSpecifications:.Color: As Shown.Material: Stainless Steel + Iron + Copper.Product Dimensions: 21 x 4 x 21cm.Product Weight: 355g.Package Dimensions: 25 x 12 x 10cm.Package Weight: 577g.Packing: Iron BoxPackage Content:.1 x Model Kit.1 x Screwdriver.1 x Nipper Pliers.1 x Mini Sleeve

i'm new to this kind of puzzle. 8 hours work. not bad. recommend. 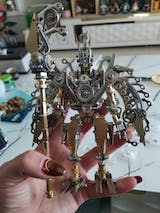 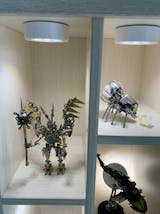 Note: 1. this item is customized. it takes at least 20days to produce. it doesn't accept returning without quality problems. pls contact me before...